Who Has Been Feeding You All These Days? 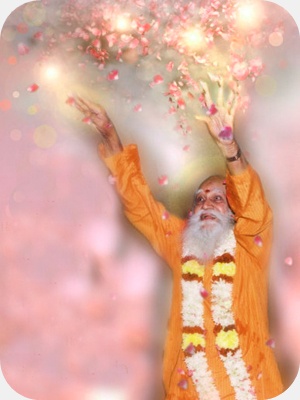 One of my very first teachers was Sadhu Swamigal of Palani in South India. I spent several years with him in the very beginning of my spiritual life. He was a great siddha (spiritually accomplished one), and he was a great tantric yogi. Pure tantric Yoga means doing upasana of the deities. Upasana means sitting next to God. When you use yantras and mantras you are using tantra. It’s a sort of internal worship with total devotion. He was a great person and he had that kind of close communication with God.

Very often at night we would hear him quietly talking to God, almost like a friend. His main deities were Lord Muruga and the bountiful Goddess, Mother Annapoorna. He did upasana of Annapoorna because he wanted to feed everyone. Even today, long after he left his body, his ashram still feeds thousands of people every day at Palani Hill.

All the spiritual seekers and pilgrims around just go there and eat. We never knew where the provisions were going to come from, but they always came. Often rich people would come and give money to the ashram and say, “I want to feed two thousand people today in memory of my father,” or something like that. Of course the ashram had huge vessels and the people who contributed the money would themselves come and serve.

But one day as we were about to retire, the person in charge of the provisions came and told myself and another swami, “The food’s all gone. We cannot even make gruel for tomorrow. There’s not even a single grain of rice. We don’t know what to do.”

Swamiji was sitting there on the veranda talking to some people. We went there, wringing our hands. “What is the matter?” he asked. “Swamiji, there is a crisis.” “Hah! What is the crisis?” “There’s not even a single grain of rice for tomorrow.” He laughed and laughed, “Oh, I see. Terrific. What are you going to do?” “We don’t know.” “I see. Well, who has been feeding you all these days?” “Muruga. Annapoorna.” “If you deserve it, you will be fed again tomorrow. Don’t worry. Go to sleep.” That’s all he said, “If you deserve it, you will get your food. Go.” And we simply had to go and retire.

At 12 o’clock midnight, a farmer from the next village came and knocked at the door. When we opened it, we saw two cartloads of rice bags. The farmer said, “I was just falling asleep when I had a dream. A beautiful lady dressed all in white appeared to me and said, ‘Get up and take some rice to Sadhu Swamigal’s ashram. Go right away. They need rice for tomorrow.’ I didn’t have the courage to question her. I simply put the rice in the carts and brought it here at once.”

Imagine how we felt. Many times it happened, many times. We should have that kind of total trust in God. We should know that if God is going to provide for us, it will be provided. We don’t have to worry about it.